The Alpujarras, the Tropical Coast and Guadix

Apart from the charming capital of Granada, the province offers other interesting sites, among which there are specially three to be distinguished, although there are more trips, according to your wishes (see private visits). These sites are ‘the Alpujarras’ , the ‘Tropical Coast’ of Granada and Guadix. 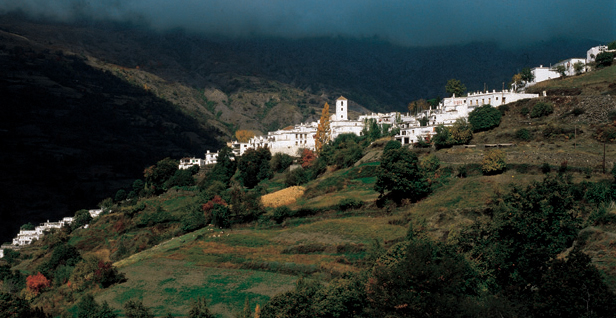 ALPUJARRAS (full day)The ‘Alpujarras’ is the area South of the Sierra Nevada. It is a unique landscape, where you can enjoy a microclimate taking you from almost sea level until heights of over 1700 mts. We will visit some lovely typical mountain villages proud of its own architecture, covering the slopes of the mountains, in an area totally insulated from civilisation until recent times.

On our way to ‘the Alpujarras’ we will visit the village of Lanjaron, famous for its thermal waters and spa, continuing to the high Alpujarras where we can find villages such as Bubion and Capileira, with their unique architecture and layout, reminding to the Muslim days, as these grounds were still occupied by the Berbers even alter Granada was conquered. It was in these places where the battle to reconquer Granada in 1568 was organised. Its houses are made of slate and wood, covered with flat roofs of clay, and white washed with lime, with their typical extensions covering narrow streets. Each village is surrounded by fertile gardens, build up in terraces and irrigated with the water coming from the Sierra Nevada. Places full of interest scenic as well as folklore and handicraft, as in the local shops you will be able to take a bit of this area with you, buying maybe a typical rug (‘jarapa’) or a ham, cured with the dry air of the Sierra Nevada.

THE TROPICAL COAST (full day)Another option is the excursion to the Tropical Coast, where we will enjoy a unique micro-climate allowing plants such as chirimoyas, avocados and mangos to be grown. A first stop will be made in the village of Salobreña, the former Salambina, and build on a rock and founded by the Phoenicians. It’s crowned with the remains of a former Moorish castle, the summer residence of the sultans of Granada, which allows some marvellous views of the surrounding grounds and coast line.  Our next stop will be in Almuñecar, founded as well by the Phoenicians, and although nowadays its is the main tourist resort of the province of Granada, it still guards its traditional part. Free time to visit its archaeological museum, revealing its rich history, or just have a walk along its tropical park with its parrots and many other birds.   The next stop will be in the village of Nerja, located in the province of Malaga, and known for its promenades, restaurants, as well as for its world famous caves, discovered in the 20thcentury, and a phenomenon of Mother Nature. Posibility to visit all year round.

Our third option is Guadix, north-east of Granada, famous for its caves, even in modern times used as a house, conserving a regular temperature all year long.